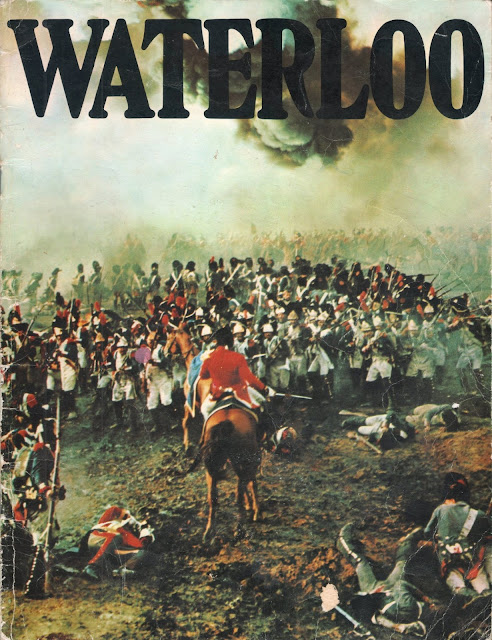 Everyone else on the wargaming blogosphere seems to be celebrating the 200th anniversary of Waterloo today with quite a few posts featuring the poster for the 1970 film directed by Sergei Bondurchuk.  I wonder how many people will be watching it tonight? 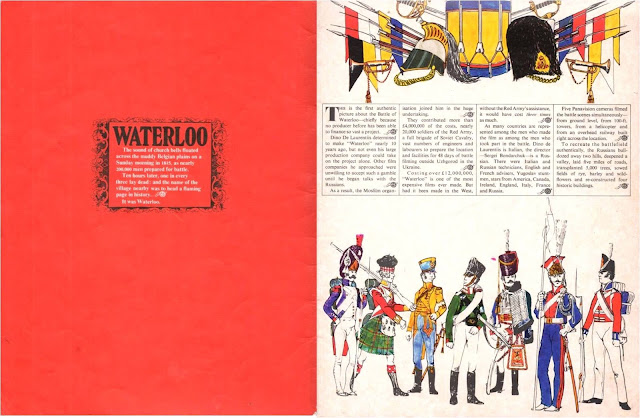 I went to see it with my father, who was responsible for my interest in Napoleonic warfare, when it first came out, in Ashford cinema. 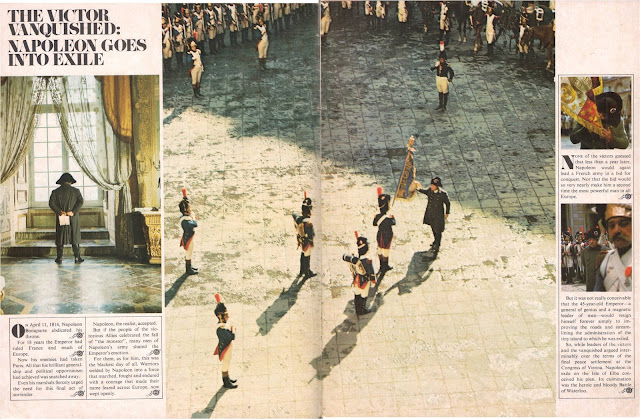 In those days, big films would have a souvenir programme you could buy at the cinema and my father bought me the one for Waterloo which, forty five years later, I still have. 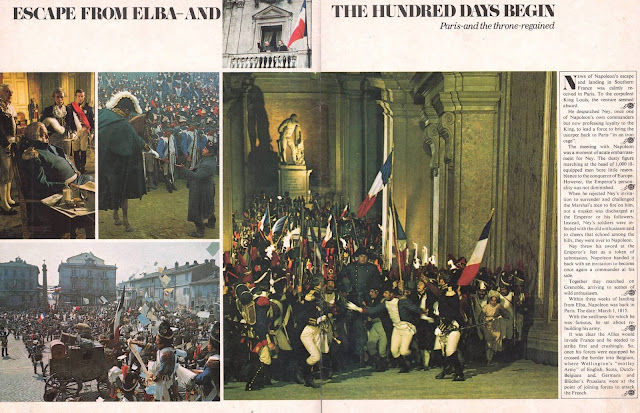 The brochure told the story of the battle illustrated with some wonderful stills from the film, together with a few pages of behind the scenes information. 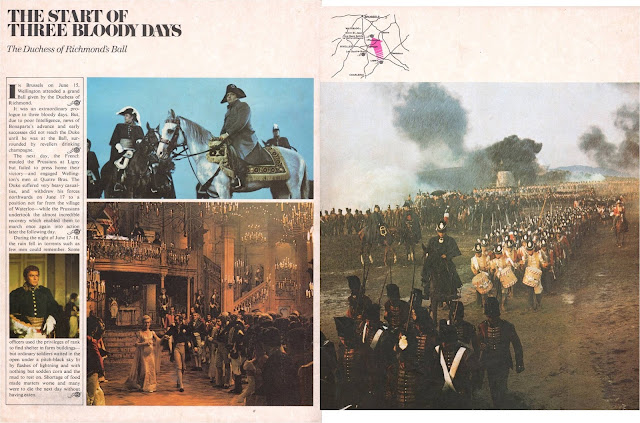 I loved this booklet when I was younger and it encouraged me to collect Airfix Waterloo figures, even though I never painted any.  Actually, that wasn't quite true I did paint some in 1995 at about the time my daughter was born.  Her arrival left no time for painting soldiers and I didn't touch a paintbrush for five years. 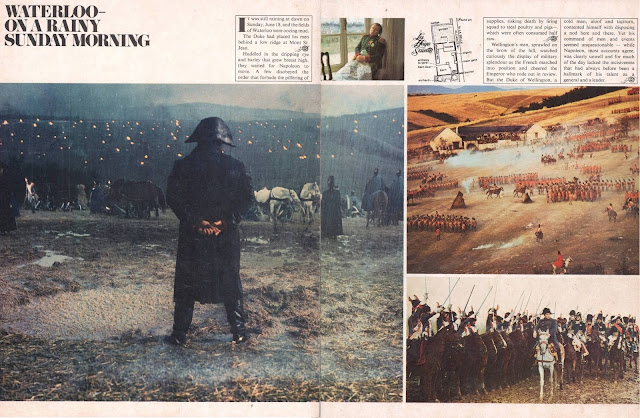 Although there must be many people, like me, who kept this programme, there must be some younger fans of the film who haven't seen it, so I decided to scan it in its entirety today as my Waterloo commemoration. 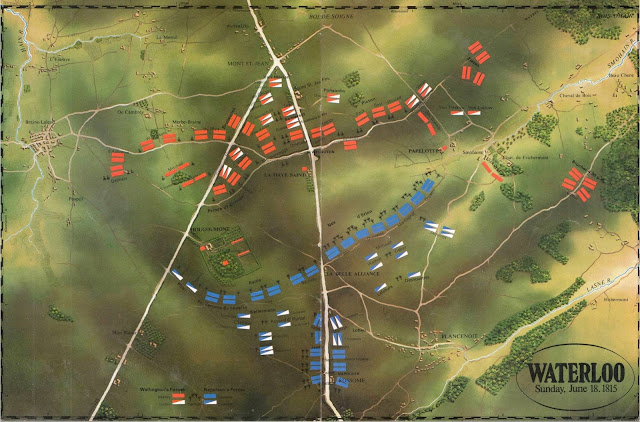 I particularly appreciated the map of the battlefield, at a time when I didn't have any other books on Waterloo at all and I used this to lay out my 20mm recreation on the 7' by 7' board which I used to put on the dining table.  This had to be carefully covered with blankets to protect the surface of what was an expensive piece of furniture.  I had to remove the dining room chairs from the room completely, as they actually dated from before the battle itself! 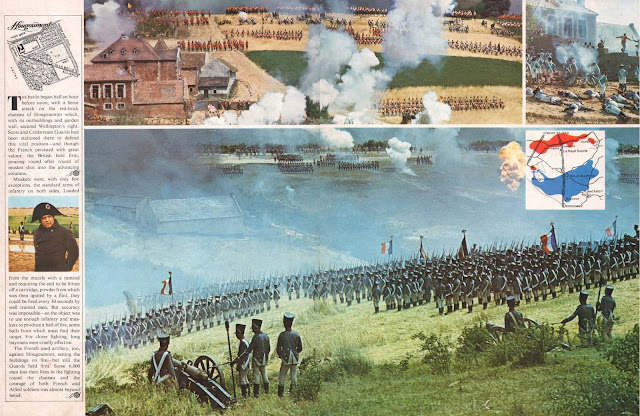 There is much to find fault with in the film today: Such as all the troops wearing dress uniforms, the lack of any of Britain's allies in the arrayed forces, the very mountainous version of Belgium, some terrible dubbing of the multi-national cast and a miscast Rod Steiger's very mannered performance. 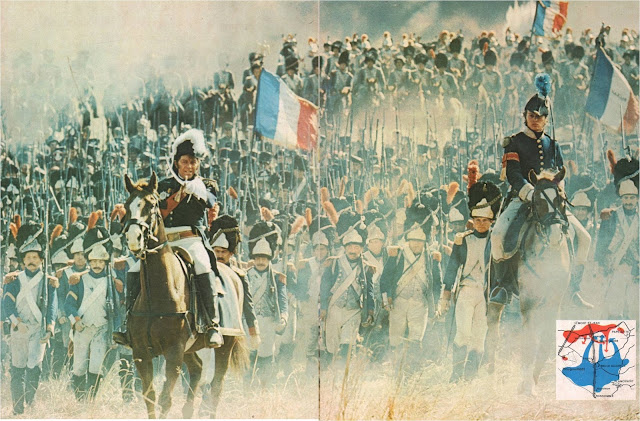 There are other issues which I am acutely aware of too, such as the fact that the venue for the Duchess of Richmond's ball was far from the splendid building shown in the film and was more akin to a barn. 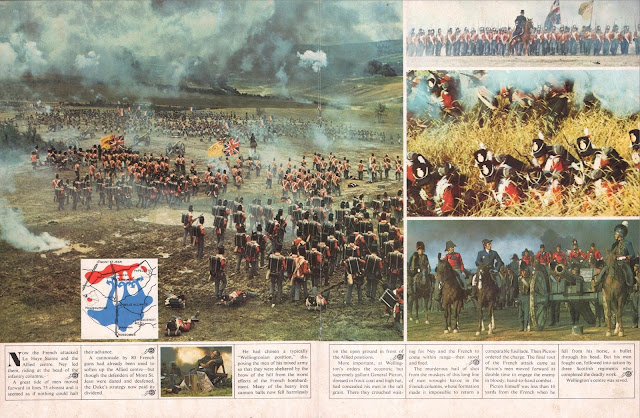 However, the recreation of the buildings on the battlefield, Christopher Plummer's Wellington and the sheer number of extras make it a favourite.  In these days of CGI we will never see its like again. 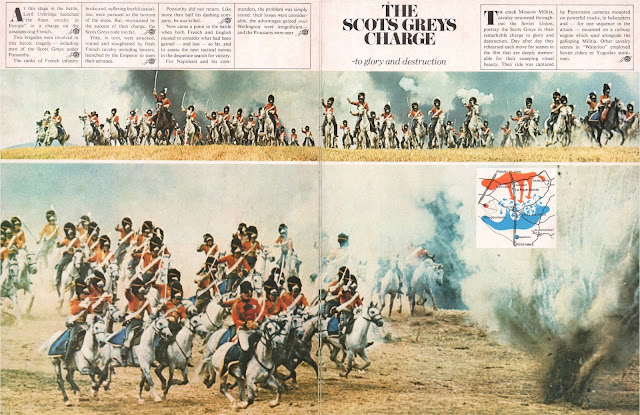 These days the battle scenes would be rendered in the now fashionable monochrome (see The Hobbit: The Battle of Five Armies) losing the effect of the uniforms, which for a young Legatus was the main appeal of the film. 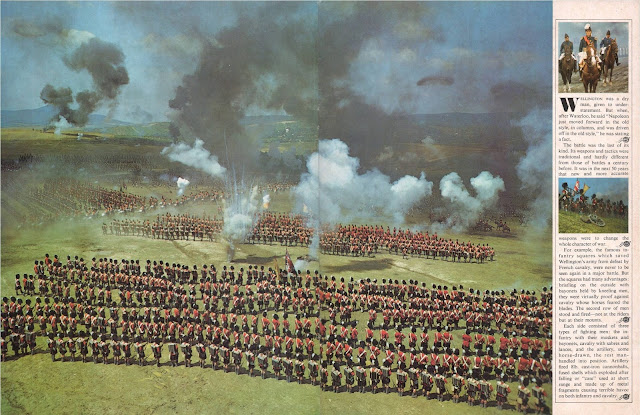 Looking at shots like this makes you realise how futile it is to try to recreate the feel of Napoleonic battles with units of a couple of dozen figures.  At least my Charles Grant sized battalions of 48 in my Airfix days looked a bit better! 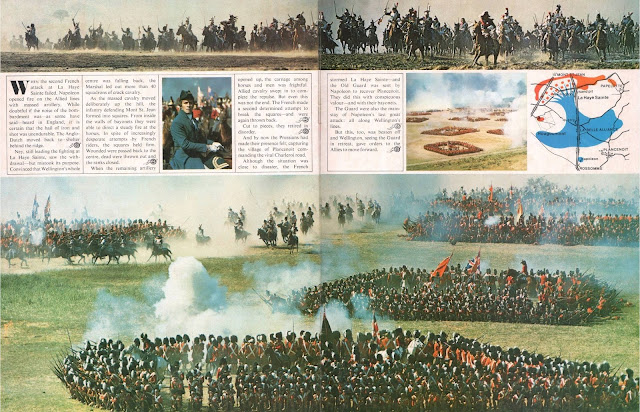 Waterloo really is a battle for small scale figures, much as I dislike their gnome -like proportions!  Maybe something for 15mm?  One day! 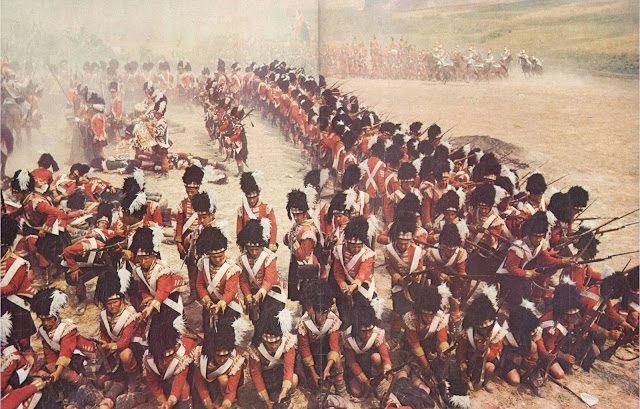 I had this shot as a poster on my wall for many years and even then noted the fact that all the troops were armed with bolt action rifles not muskets.  Tragic. 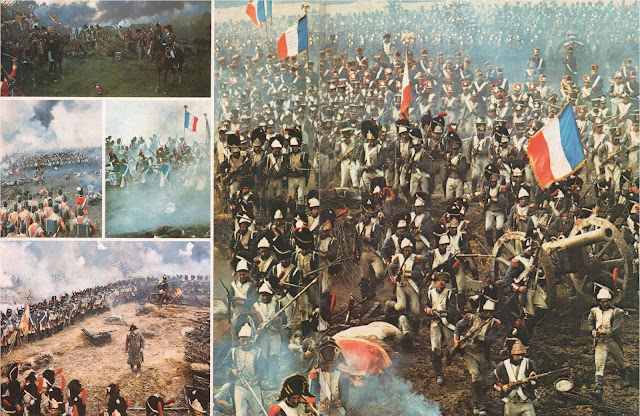 The first metal figures I was given by my father were some Hinchcliffe Imperial Guard but I remember being disappointed that they were in campaign dress.  This is what the Imperical Guard should look like! 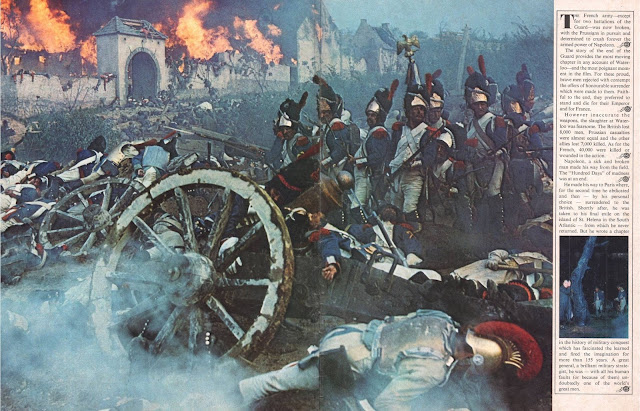 For some reason I always got upset at this shot of the burning La Haye Sainte, probably because I spent so much time building and painting my Airfix model! 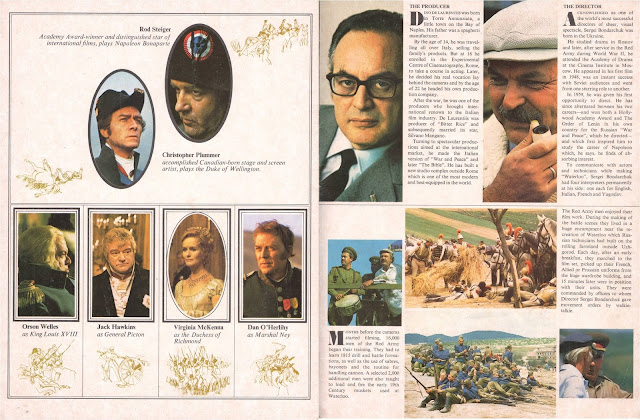 Even at the age of ten I was very struck by Virginia McKenna, as the Duchess of Richmond, and a couple of years ago I met her at a charity concert at the Yehudi Menuhin School, which is about two miles from where I live.  She was still a very elegant lady. 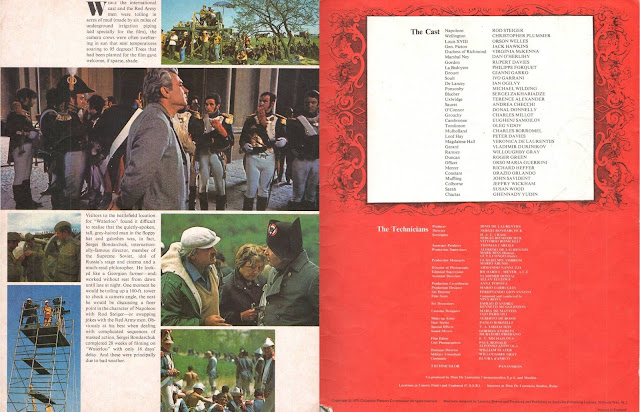 The only others of these souvenir brochures I had were the ones for Oliver and A Christmas Carol but I didn't bother to keep those, of course! 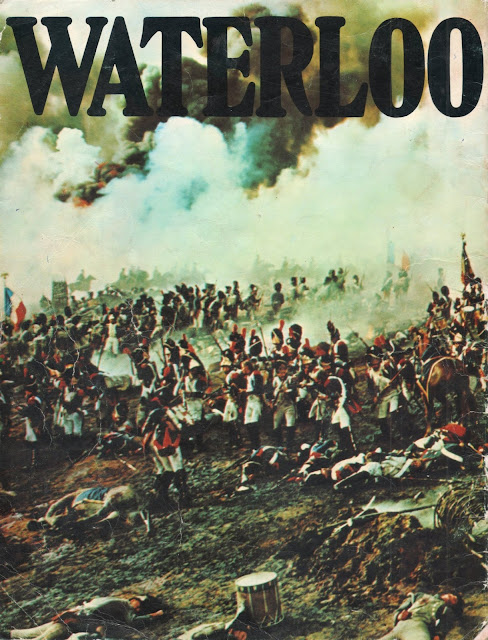 Anyway, this brochure is still something of a treasured possession and is carefully kept in one of my filing drawers.

Of course, the choice of what music to listen to when writing this post was easy.  One of the other positive things about the film was Nino Rota's evocative music.  Even on one hearing at the cinema I could remember the tune of what I later found out to be the French march La victoire est à nous.  It wasn't until the nineteen nineties that I came across the soundtrack CD in a record shop in Milan.

Posted by legatus hedlius at 13:43

thats a fantastic souvenir sir! and a great film i'll be watching it on sunday..

Whilst I've seen the movie a few times (and like, you, was introduced to it by my Dad), I had never seen this brochure before.

Absolutely terrific photos to pore over and savour. I love the photo of the Scots square in particular (though do those 'muskets' have bolt actions?!).

Thanks so much for sharing this ...

I am jealous, I wish I had bought the souvenir when I first saw the film at the Regal cinema in Lanark, which no longer exists of course. Stieger was Napoleon for me, still is. Thanks for sharing.

Yes, the Astoria Ashford was built in 1939 and closed in 1976. It served as a bingo hall until 2001 and was demolished the following year to make way for old people's homes. I saw You Only Live Twice and Carry on Cowboy there too!

My brother and I loved this film as boys I hunted down a DVD of it, sadly its not the best of copies.

Thank you so much for sharing with everyone this fabulous photographic material of the film. For fans of the napoleonic times as I am, is a really wonderful gift.

I remember watching the film 'Waterloo' in 1970 aged 10 + and it sparked off a lifetime interest in the battle. I first visited the battle site in 1971 after getting my parents to make a detour as we were pulling a caravan on a European tour around Belgium, France, Germany, Switzerland and Italy. So fascinated I was by the part played by the Coldstream Guards that I joined them in 1976. Training at
the Guards Depot in Pirbright, Surrey. Sadly my romantic idea of that regiments history was not shared by my fellow soldiers. It seemed to me to be the privilege of Officers sat in their comfortable Mess.

3 years Later I transferred to the Corps of Royal Engineers and eventually joined Military Survey where I saw a map of Waterloo in the RE Museum at Chatham that Wellington had ordered of the south of Brussels long before the battle took place. I visited the battle again in the 90's, whilst at University. And in 2009 I was in the re-enactment as a soldier in the 32nd Cornwall regiment which was in Kempts Brigade. Positioned originally on Wellington's left and North East from La Hayne Sainte on the ridge. At the time the 32nd had a mauling at Quarte Bras & were not up too full strength.

In 2015 (the 200th) I was involved in archaeology at Hougoumont. One of the highlights of my stay there was to find a musket ball which must have been fired from the north gate (Hougoumont) at the French by a former member of the Coldstream Guards in 1815. I realised that I was the first person to pick that musket ball up and handle it since it was fired by a Coldstream Guard in June 1815. That gave me a real sense of continuity and feel of history.

What a fantastic story! We are the same age, although my inspiration by the film only led to a box or two of Airfix Napoleonics and then to wargamin!

Like many wargamers I began wargaming with Airfix's plastic HO/OO figures. I certainly had some at Junior school so must have acquired them not long after they came out in 1969. I remember the French and British infantry coming out in 1972. By the time the two artillery sets appeared my friends, Bean-Kid, Cess-Pitt and Brookbank and I were able to recreate Waterloo in cream coloured glory on the 7' by 6'6" board I laid on my parents dining table (much to the chagrin of my mother who insisted on personally laying the blankets on the mahogany table and moving her treasured early nineteenth century Trafalgar chairs out of the room).

I bought a few of Peter Gilder's Hinchliffe French, some carabiniers and some Imperial Guardsmen and I looked down at Lugs Willerton's Miniature Figurines figures as they seemed a bit short!

My father encouraged me in my Napoleonic interest and he took me to see the film Waterloo on its release. I still have the book by Ugo Pericoli of the uniform designs from the film and the original film programme (from the days when you could buy an illustrated programme at the cinema for the film you were seeing). He also took me around the Musée de l'Armée in Paris and bought me some 54mm painted plastic figures and a set of transfers of Chasseurs of the Guard with which I carefully decorated my wastepaper bin at home!

About 13 years ago I started to paint some Napoleonic plastics properly but got frustrated at the bendyness of them. When I began to paint 28mm figures shortly afterwards I realised that of all periods Napoleonics require huge numbers of figures for a wargame and, anyway I didn't like the proportions of the main two ranges Foundry and Front Rank. So I concentrated on Ancients and Dark Ages for several years.

Then, of course, came the Perry figures and they were right for Quatre Bras, the battle I had always been most interested in. Again I didn't get anything other than a few Dutch Jaegers because the Perry twins were quoted as saying that they would never do British. Something which has completely changed of course.

I recently decided to abandon any large scale plans but maybe it's time to look at large skirmishes instead.

legatus hedlius
I live in Surrey, England but spend much of my year travelling around the world which seriously eats into my painting and blogging time!